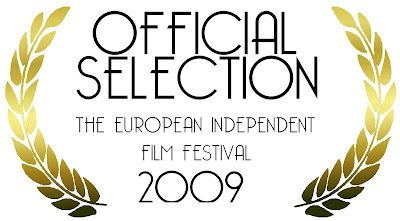 The 4th edition of The European Independent Film Festival (ÉCU) will be held March 13– 15, 2009 in Paris. The Official Selection consists of one hundred of the very best independent films from around the world - and Anny Carraro of Studio AC has been selected with "Impossible Venice," about the Venetian artist Ludovico de Luigi. 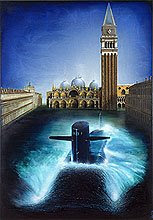 
Ciao from Venice,
Cat
http://venetiancat.blogspot.com/
Posted by Cat Bauer in Venice Blog at 1:50 PM 1 comment: Links to this post 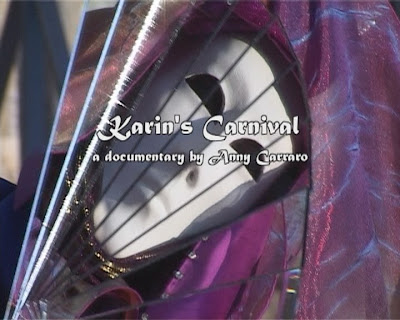 (VENICE, ITALY) Karin is an average German woman, except for one remarkable quirk -- for the past 20 years she has stuffed her suitcase full of fanciful costumes and taken the train down to the Carnival in Venice. After slipping into one of her own marvelous creations, she transforms from workaday banker to 18th Century noblewoman, and steps out onto the streets of Venice and into another dimension.

Submitted into this year's Industry section of the International Venice Film Festival, Anny Carraro's 46-minute documentary follows Karin and her entourage through their initial encounter at the exclusive Caffè Florian, to fabulous masked balls at Venetian palaces, to a deserted Piazza San Marco where the circle of masqueraders swears a solemn oath to return the following year.

With glimpses of timeless Venetian traditions sprinkled throughout the film -- the Flight of the Angel from the Bell Tower, outdoor theatrical productions, the ancient beauty pageant, La Festa delle Marie -- Karin represents the hundreds of foreigners who descend upon Venice each Carnival and warp into another time, another dimension. Why do they come? Anny Carraro's final images let the viewer draw his own conclusion.

Posted by Cat Bauer in Venice Blog at 6:37 PM No comments: Links to this post 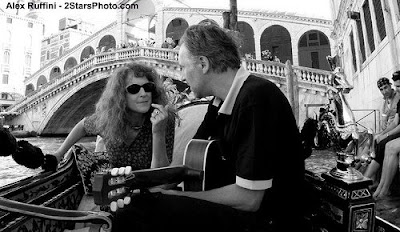 (VENICE, ITALY) The Canadian tenor, Nils Brown, arrived at my house early one morning last week, together with documentary filmmaker, Anny Carraro, to shoot some footage . He was returning to Canada the next day, so this was the only opportunity we had to film what Anny needed for her section of the Nils Brown documentary -- it is a co-production with a Canadian company. Anny wanted to take advantage of the view from my balcony, the Grand Canal overlooking the Rialto Bridge. Because I was blogging the event, I said to Nils, "I've asked a rock photographer to take some photos this evening on the gondola ride. I think it would be an interesting combination -- classical music meets rock & roll. More cool. More hip."

Without a word, Nils Brown picked up his instrument (at that point I didn't know what type it was) and walked out the door.

Anny had been setting up the shot, and wasn't paying attention. We mulled over Nil's behavior. I said, "It's because I said, 'I think.' Not: 'What do you think?'" Now, that may seem a very small difference, but, after having relationships with some major egos -- a necessary requirement, I believe, to survive as an artist -- I was familiar with the scene. You'd think I'd learn my lesson, but no. I said, "I will apologize, and everything will be all right."

Anny left to do some crucial business. Not more than fifteen minutes later, Nils arrived back at my home. I met him downstairs in the calle. He was peeved, as anticipated, about the "cool, hip" remark. We got into an... energetic discussion about who had less rules on the planet: a wandering tenor, or a writer with a blog.

Now, remember, we both have other jobs -- Nils performs on stage with prestigious orchestras all over the world, and I write novels published by Knopf -- in those venues, we both fall under rules of enormous weight. So, this was a little discussion on who had more freedom if we truly choose to take advantage of all the opportunities available to our respective talents. He said, "All I need is my voice and my guitar. You need me or you would have nothing to write about." I said, "Really? I only need my imagination and my computer. I can write about a statue." (God immediately punished me because my computer crashed soon after, and I am writing this blog on a friend's computer!)

In any event, after I apologized five times, he put out his hand, and said, "Apology accepted." I asked, "What astrological sign are you?" He made a face, as many people do when I ask them that question, but it saves me a lot of time. He said, "Gemini." I laughed. "I'm a Leo. It often starts like this between Gemini and Leo. We're going to get along just fine."

Later in the evening, Alex Ruffini from http://www.2starsphoto.com/ arrived at the gondola; he and Nils immediately hit it off. 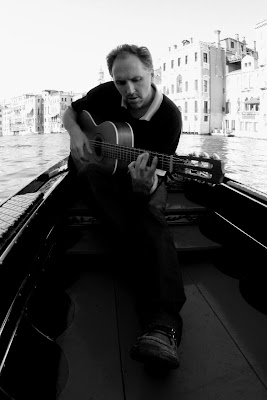 By that time, Nils and I, too, had bonded; we spoke about how satisfying it is to perform in front of young people and why he chose to sing on the streets of Italy. He said, "What I sing is like poor man's opera. The arias without the entire storyline." Unfortunately, there was no room for Alex in the gondola with everyone's assorted equipment, so we'll have to make do with pre-ride shots.

The gondola ride itself was spectacular. Nils sang like an angel. People lined the fondamente and the bridges to hear him sing Venetian folk tunes, accompanied only by his guitar. There was much applause. I had tears in my eyes. Anny said the lighting was perfect.

So, once again, out of the chaos comes order; out of the mingling of the different creative energies comes a result. It is something fascinating and profound, the creative process, and never ceases to amaze me.

Ciao from Venice,
Cat
GO TO MAIN BLOG:
http://venetiancat.blogspot.com/
Posted by Cat Bauer in Venice Blog at 12:19 PM 1 comment: Links to this post (VENICE, ITALY) If all goes as planned, Yours Truly is going to be filmed by award-winning director Anny Carraro on a romantic gondola ride with the gorgeous tenor, Nils Brown, who is currently on tour here in Italy. A modern-day wandering minstrel, he makes his home in Montreal, Canada.

Nils Brown has performed with the American Bach Soloists (San Francisco), the Boston Handel and Haydn Society, L’Orchestre Symphonique de Montreal, Opera de Montreal, Opera de Quebec, the Baltimore Symphony, L’Orchestre Symphonique de Quebec, the Smithsonian Chamber Players, Chicago’s Music of the Baroque, the Portland Baroque Orchestra, the Vancouver and Edmonton Symphonies, the Calgary Philharmonic, Tafelmusick, the Jacksonville (Florida) and Newfoundland Symphonies, and the Florida Orchestra, among many others, as well as with many important choral societies and early music groups throughout North America. He can be heard on the labels ASV Gaudeamus, Analekta, Naxos, Newport Classics.

I wish I could say that Anny wanted me for my brilliant acting ability, but she really just wants my red hair.

You regular readers will remember that I've mentioned Anny before. Last year she won:

Best International Director (Documentary)- Anny Carraro for Impossible Venice, which is a film about that Impossible Venetian, the artist, Ludovico de Luigi. To give you an idea how Anny's brain works, once Ludovico and I had a huge row. I told Anny about it, and the first thing she said was, "I wish I had been there! I need that scene!" I replied, "Well, you're just going to have to hire actors to reenact it because I'm not going through it again." Oh, directors! They say writers are strange, but directors are truly... unique. I should know. I was married to one.

Now that I think about it, visual artists are the most bizarre, even stranger than musicians -- and I've known my share of musicians, from a wide range of genres, from classical to rock. Once in Los Angeles, I was with a group at a Chinese restaurant that included the drummer, Jim Keltner (he and his wife, Cynthia lived down the block -- in fact, Cynthia is in the Acknowledgments of Harley, Like a Person -- she was one of my very first readers). As Jim watched the food go round and round on one of those spinner things they have in the center of the tables in the restaurants in Chinatown in LA, he said, "You Hollywood people are so strange." That, coming from the mouth of the drummer for John Lennon, George Harrison, Ringo Starr, Eric Clapton, etc.! It really makes you think just how strange creative types must seem to the rest of the world if we think each other is strange!

Anyway, I am looking forward to meeting Nils Brown, even if he is a tenor:)

Ciao from Venice,
Cat
Posted by Cat Bauer in Venice Blog at 11:40 AM No comments: Links to this post